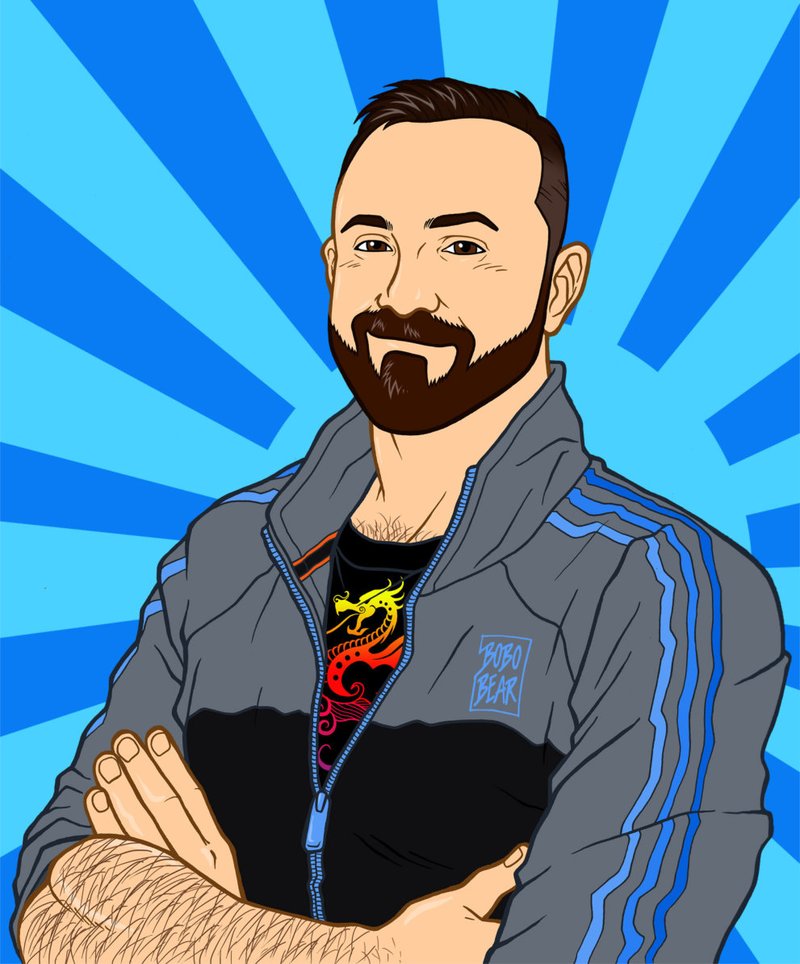 Bobo Bear is currently the cartoon realization of a gay bear character, Adam, that has evolved into a collection of sexy men. Currently appreciated online in drawings on social media and also for sale as branded lifestyle objects and clothing.

As a child Bobo was quite introverted. His mother recalls that at two years old he drew the first of many sketches depicting Candy Candy, a Japanese anime character: that was just circles and dots but Roberto's mum still claims it was far more advanced than the drawings of the average two-year-old. Bobo spent a big part of his childhood drawing and illustrating his own fantastical characters and stories.

As a teenager he wrestled with his identity and looked for answers to his sexuality in religion but ultimately he found the answer in art. At 21 joining an art school enabled him to focus on perfecting his style of drawing comic characters.

To pay for his dream of a specialist education Bobo had to take a part-time job working in a supermarket. Then after graduating with good results he found it difficult to find a job drawing cartoons in a small Italian city, so he became progressively more involved in the supermarket until one day he woke up manager.
Although surrounded by loving friends and family, in this period life ultimately left Bobo feeling empty, hiding his sexuality, quieting his inner voice and letting his dreams fade. Trapped by his life he often found himself escaping the sound of the cash registers, searching the world beyond the isles with a pad and pencil, traveling on a bus or a train even an occasional plane discovering places more accepting of his passions.

Every galleries beautiful artworks inspired and ignited the fire inside this traveling man that it was time to make a choice and move, but the practicality of everyday life had him returning to open up the supermarket.

A life changing reality check shook Bobo from the status quo when an important man in his life lost a six months battle to cancer. Time to regard himself, to realize his ambition was not in the supermarket. He packed his precious things, grabbed his pencils and some paper and took a plane direct to London.

On arrival Bobo found himself growing daily, new influences inspired him, drinking coffee and conversing with new friends fed him and ultimately he became able to dream again but this time with focus. Inspiration took him by the proverbial balls, he was inspired to invent and realize ‘Adam’ his first gay character.

Adam continues to take Bobo completely by surprise, the idea of shy guy with dream from Italy now with products on sale in central London stores, developing ideas with big bears about merchandising, finding cartoons selling daily in his online shop and his imagination on the pages of popular magazine Meat…. What's next for Bobo? A series of short cartoons, Comedy show graphics and new friends and adventures for Adam.